A homegrown Oakland football player will soon be taking his talents to the CFL. Former Lincoln University cornerback Trey Hoskins signed with the Edmonton Elks on February 9th. Hoskins is an Oakland guy inside and out, since he was born in the city. But his journey to Lincoln and the CFL has been a winding road.

Hoskins was first noticed at a 7-on-7 camp in his high school days. He played for a team called KT Prep, a nationally ranked 7-on-7 team from the Bay Area. Scouts from the University of Hawaii quickly recognized his talent, and extended Hoskins an offer to play for the Rainbow Warriors football team.

But he was also offered opportunities to play for two other schools. One of those offers was from Weber State, out of Ogden, Utah. Hoskins chose to play for Weber State as a Wildcat and had his first taste of football beyond the high school level, arriving on campus as a true freshman in 2016. Hoskins is talented and hardworking, but he also gives credit to Taron Johnson, his former roommate and good friend, for helping shape him into the player and person he is today. 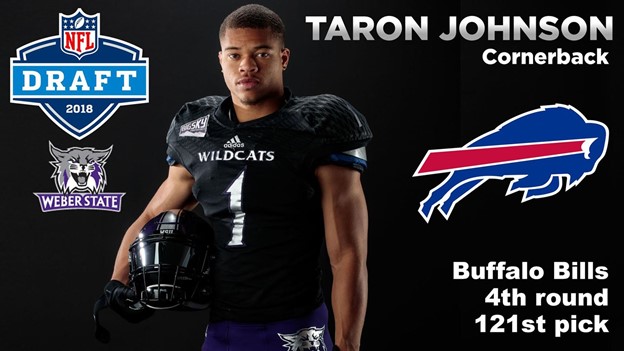 “I went up there for three years and played with (Bills Cornerback) Taron Johnson. He was my roommate and taught me a lot of things. He was one year older than me. I got a lot of experience from being able to watch somebody that’s now in the NFL. I’m glad I got to experience that.”

After he played for Weber State from 2016-2018, his life briefly took a detour away from football as he became more focused on raising his daughter. Family life and the joy of fatherhood suited him well, but the itch to play football never went away for Hoskins.

“After my junior year, I ended up having my daughter. I really stopped playing football. I was just a full-time Pops,” Hoskins said. “I should’ve had my senior year but didn’t. I was still working and trying to provide for my daughter, and I felt like I was wasting my talent.”

But after taking time off from football and school, little did he suspect that a return home to California to see family would open new doors for him.

“I came back to California because that’s where my parents were,” Hoskins said. “As soon as I got back, they said there was a Division II school that’s opening up. It was just an opportunity that came out of nowhere.”

Hoskins made the most out of his final year of collegiate eligibility as an Oaklander. During the 2019 season, the long and lanky 6’5” cornerback snagged five interceptions, and forced seven total turnovers. After finishing his career with the Oaklanders, Hoskins stayed in football shape and trained continuously, staying ready for his next opportunity. That big break would come in the form of a private CFL tryout that he attended with five other prospective players in January of this year.

“I was one of the six to drive out to LA. We had a workout, and as soon as they saw that I was 6’5” and playing corner, and saw my 40-yard dash time, they offered me on the spot right there.”

Hoskins now joins the Edmonton Elks, a proud CFL franchise that has won 14 Grey Cups, the equivalent of Super Bowl titles here in the States. The team last won the Grey Cup in 2015, but has struggled in more recent years. Hoskins says he’s just focused on helping to build the culture.

“We’re trying to build a different culture of winning, hard work and dedication,” Hoskins says. “Obviously we’ll try to win as much as we can, but we’re just trying to change what’s been going on around Edmonton. We want to create a winning, family-type environment. That’s our goal.”

From KT Prep, to Weber State to Lincoln University, Trey Hoskins has always been hungry and focused on his next opportunity. Hopefully he makes the most of this one, as a professional player in the Canadian Football League!