Three words could sum up the Lincoln University Oaklanders football team heading into the 2022 season: Building the culture. While every team including Lincoln University approaches recruiting and Signing Day looking to get the best athletes, the Oaklanders are most concerned with getting athletes who are of high character and integrity as they prepare for their second season on the gridiron. Head Coach Desmond Gumbs has been very upbeat about the current state of the program going into this upcoming season.

“We are very optimistic about our upcoming season,” Gumbs said. “Our recruiting has been off the charts and I’m very excited about the players that are joining our program.”

This character-centered approach to team building is not only evident on the recruiting trail, but also just as noticeable in day-to-day activities. As the team returns to school for the Spring semester, Oaklanders Defensive Coordinator Pat Henderson is focused on helping the team bond and grow together as a unit before any practice or drills take place.

“This week has just been more focused on team bonding and culture building right now. We’ve had a fabulous week of just being able to break down the standards and expectations of the program moving forward,” Henderson said. “Making sure we’re a lot more organized and providing that structure and being on the same page about what that structure is.”

Wide Receivers Coach Rickey Galvin has a similar mindset going into the early days of the 2022 season.

“I think I’m enjoying the process, no matter if it’s a little slower, I’m still enjoying it. We get to actually take our time and pick out quality guys,” Galvin said. “Not just because they’re good, but because it’s a good fit for what we’re trying to house here at Lincoln.”

Teaching X’s and O’s certainly has its place in football. But the game has the potential to teach bigger lessons, and prepare young men for life.

“It’s bigger than football. Once you build positive relationships, they (the players) understand it and receive it well, you’ll find a lot of guys wanting to play for you. That’s why I go hard at this part of it. It’s really important to establish mutual respect, and making sure that you show that you care and want the best for them.”

The brotherhood and bond being forged now, will be put to the test once the Oaklanders take the field to open the season against Webber International University on August 27 in Babson Park, Florida. Under second-year head coach Eric Potochney, the Warriors went 2-8 last season, but their two wins came against Faulkner University, a team ranked in the Top 25 of the NAIA, and Webber International’s archrival, Warner University. These two wins will definitely give the Warriors the confidence that they have the ability to win big games, and they will undoubtedly see the opening game against Lincoln University as one of those games.

In addition to that, the experience and leadership that Eric Potochney brings to their program will also serve them well. While Potochney is only in his second season as a head coach at the helm of Webber International, he’s been on the Warrior coaching staff for 15 years, including serving as the Defensive Coordinator for a decade until he took over the reins last season. The Oaklanders will certainly have to be at the top of their game if they want to return to the Bay Area with a win to open the season.

Five days later, the Oaklanders will travel to Commerce, Texas to face the Texas A&M Commerce Lions. This is another opportunity for the Oaklanders to leave their mark as a growing program. The Lions, a Division I FCS program and members of the Southland Conference, went 7-4 last season. They found a variety of ways to win, from shutting down an opponent with stingy defense, to exploding on offense and winning in blowout fashion. They’ll serve as another big test for Lincoln University. 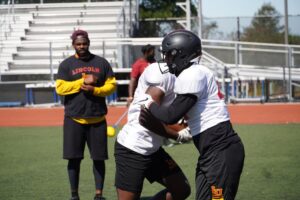 “That is a true test for us. We’ll be on ESPN, and this is the first season of games for Commerce to be Division I,” Galvin said.

“They’re a good program. They have shown that they can compete at a high level, and I think that’ll be a great time for us to shock whoever’s watching and tuned in. And it allows us also to use that as a recruiting pitch. We’re going to need the guys to come in and compete.”

Galvin also says he loves being an underdog, and believes that an underdog mentality will strengthen the bond of the team as the program continues to move forward.

In addition to the games against Webber International, and Texas A&M Commerce, the Oaklanders will also play at least six other games this season. Here is the 2022 schedule as it currently stands.

The entire Lincoln coaching staff, and every player is determined to win this season. They’re on a mission. A mission with one singular goal in mind: building the Oaklander football program into something special that every Bay Area resident can be proud of for years to come!