Assistant Coach, Jessica Rogers, described this game as one of her top highlights of the season. “Three of our players in the last game had double doubles, over ten points and ten rebounds!”

This year was Rogers’ first year coaching Women’s Basketball at the collegiate level. Previously she coached at Pinole Valley High School and Trust the Process AAU.

Coach Rogers explained what it was like to be a part of the inaugural season at Lincoln University. “It was a one of a kind experience. Not many other places get the opportunity to start a program from scratch. It felt amazing for the players and coaching staff to call it our own.”

She shared a favorite memory from the season, which actually did not appear on the basketball court. “We had an away game in LA, and the coaches decided to have the team interview each other to learn more about one another. They gave presentations about each other and it turned out to be a great team bonding experience. The whole team had a blast that night and learned a lot about their teammates.”

With the season ending, goals for next year are already in place for Rogers and the rest of the coaching staff, consisting of Ron Williams and Tony Jones. Rogers stated, “We’d like to build on what we started this year, since we were very fortunate to start this women’s program. Scheduling more Division 1 and Division 2 opponents will be key, as well as to just win more games.” She also emphasized making it a goal for the team to have fun and making this something for the whole community to enjoy as well. 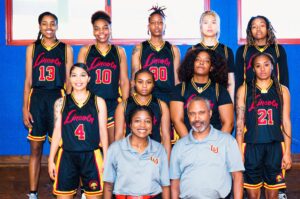 There are high hopes for more home games next season, as most of the games this year were away. “We can’t wait to have home games so everyone can come out and meet us. We want the community to enjoy basketball and it’s something that can bring us all together.”

Rogers added that the majority of the team is from the Oakland area, including several players from Merritt and Lainey Community College, and some athletes from local high schools. Many of these girls will be returning to the Women’s Basketball team next season.

She concluded with high energy and positivity for the next season. “This was an amazing opportunity and I can’t wait to share it with everybody again.”